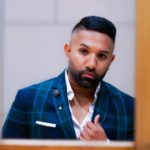 Tobin Thomas is a dedicated member of the South Asian dance/entertainment industry who strives to create an accessible and resilient future for South Asian artists in Canada. Starting his career at the young age of five, he has been influenced primarily by the Bollywood industry; to later establish his own dance company, Shadow Entertainment. Dedicated to providing young talented artists with a platform regardless of age, level and background. Tobin motivates his team members by constantly challenging them and exposing them to new genres of dance and choreography.

Tobin believes in always delivering the finest through the best power-packed performances! His artistic approach to choreographies are inspired by the intricacies of music and his sheer commitment towards creativity and originality. He incorporates bold and elegant movements drawn from the fusion of Bollywood and Hip-Hop. Through continuously striving to perfect these genres, Tobin has gained the skills to adapt to various styles to his repertoire such as Kathak, Bharatanatyam, Classical Fusion, Bhangra and Dancehall. He consistently challenges himself to incorporate these styles in the dance pieces he produces.

As much as he loves simplicity in his work, he does not shy away from complex or more extroverted emotions in his creative exploration. He is particular about tailoring his artistry towards his specific audience and is not very fond of monotonous repetition. This very approach of sincerity and attention-to-detail sets him apart from others in the industry.

Tobin’s proficient work ethics and strong stage presence, offers him opportunities around the world and the ability to perform on an international level. He has had the honor of performing alongside high profile Bollywood stars such as, Shah Rukh Khan, Pretty Zinta, RBD, Ranveer Singh, Lilly Singh and Anushka Sharma to name a few. More of his memorable performances include performing for Ted X, NBA Halftime Shows, Coca Cola, PepsiCo, Telus, The Royal Ontario Museum, CSI America, We Day and Mystic India the World Tour.

Tobin is also the winner of the 2021 MARTYS for Outstanding Dance (Established Category). As a choreographer trying to make it during a pandemic, it encouraged him to keep thriving.

Tobin humbly acknowledges his friends, family and his community for their support in accomplishing his achievements and dreams. To take the South Asian dance community in Canada to a global stage is a difficult path, yet not impossible for him!