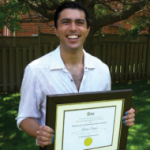 Rohan is a queer Indo-Canadian artist working primarily at the intersection of dance and theatre. He maintains practices as a performer, choreographer, director, producer and teacher. Rohan holds a Bachelor of Music Theatre Performance from Sheridan College, a Graduate Diploma in Arts Management from Queen’s University, and is currently working towards his Master’s at the Trinity Laban Conservatoire of Music and Dance in London, UK.

Rohan has worked with dance and theatre companies across the country, is an associate artist with Mississauga-based company Frog in Hand, and is a frequent guest artist at Cawthra Park Secondary School. He is the co-founder of his own collective Theatre Oculus, which premiered their inaugural production “Venus & Adonis” at the 2021 Toronto Digital Fringe Festival with support from MAC’s Matchmaker MicroGrant program.