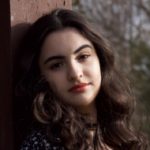 Melanie Cabral is an 18-year-old pop/country, singer/songwriter from Mississauga, Ontario. She has been singing since the age of 10 and began singing within the Portuguese community at the age of 15 where she was started performing Portuguese folklore along with her pop/country tunes. At 16, she released her first-ever single, “Broken Lights” and released her two latest singles “Unspoken” and “Far Away From Home” earlier this year. Melanie is currently attending Wilfrid Laurier University, where she is studying Community Music with the hopes to teach the gift of music later in her life and to overall improve her musicianship and talent!