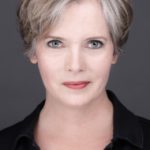 As a writer, her screenplays and produced films have won awards in New York, Los Angeles and Toronto.

As an actor, she has been working steadily in film, television and theatre for more than 25 years, with lead and principle roles in over 60 productions. Her captivating and realistic performances have garnered her eight Best Actress and four Acting Excellence Awards.

“Made in the USA, but born in Toronto” she has dual Canadian and American Citizenship with Scottish, Irish, English and Slovak ancestry. Cynthia is a member of ACTRA and is SAG-Eligible.