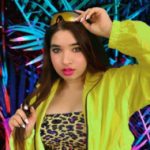 The emerging teen talent, professionally known as Cmagic5, is a high octane and soulful Canadian singer/songwriter and musician from Toronto, Canada. At age 4, she began performing in musical theatre, dance performances, and played lead roles in yearly summer theatrical performances. By 10, she had written and composed her own songs. She has completed her music theory and classical vocal training at 16, from world renowned Royal Conservatory of Music. She is also an ambassador for mental health awareness on various platforms.

Cmagic5 has just released her much-awaited Debut pop album “Ready To Run”, which explores themes of self-empowerment and love. This quarantine creation entails a mix of pop, rock, R&B and classical. With every single self-written, self-composed and co-produced, Cmagic5’s delivery is accompanied by a unique story, enhanced visualizations and memorable graphics. With a growing social media presence and impressive number of streams of 9+mil plus and counting across all digital streaming platforms, undoubtedly Cmagic5 has kicked off 2021 on a promising note.

Cmagic5’s musical inspirations include Christina Aguilera, Dua Lipa, The Weeknd, and Ava Max. With rich, mellifluous, soulful vocals coming from a petite frame, Cmagic5 has the power to evoke a profound response. Her music is contemporary pop with a refreshing blend of conventional sounds and futuristic vibes with the uniqueness of her sound created by fusing other sub-genres. Cmagic5 can perform in every genre of music from Classical to Pop and can sing in diverse languages. Her passion for making others smile and feel good is the motivation behind her music.