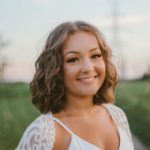 Anna Wojcik produced an accurate, mature sounding and nicely characterised version of Zerlina’s second aria “Vedrai carino”. I haven’t heard singing this good from someone so young since Emily d’Angelo burst onto the scene. One to watch.” (John Gilks, Opera Ramblings 2019)

This young Polish-Canadian soprano, has already performed for audiences across Canada, the US, Poland and Germany. At the end of September, Anna played Susanna in a self-produced backyard production of Mozart’s Marriage of Figaro for a private audience. This collaboration was approached in a COVID-safe way. In the upcoming season (COVID permitting), Anna will be a soloist with the Oakville Chamber Orchestra under the baton of Charles Demuynck. She will also appear as a soloist with the Camerata Ensemble and Quo Vadis Choir under direction of Mariusz Michalak, on occasion of their 20th Anniversary Celebrations.

Anna has won countless competitions including the 69th ACPC Marcella Kochańska-Sembrich Vocal Competition, the Doreen Chaddock Memorial Vocal Scholarship Competition, as well as the Oakville Chamber Orchestra Youth Concerto Competition. She has appeared with orchestras like the Royal Conservatory Orchestra, Toronto Sinfonietta, Camerata Ensemble, and the Celebrity Symphony Orchestra. In 2015, Anna sang in Carnegie Hall for the American Protégé Competition Winners Recital. The following year, she received the 2016 Emerging Music Artist MARTY Award from the Mississauga Arts Council for her accomplishments. In 2018, she participated in the Saarburg International Summer Music Festival in Germany. Within the past two years, Anna has performed multiple opera roles including: 2nd Spirit in Mozart’s Magic Flute (GGS), Annina in Verdi’s La Traviata (SOLT), Nora in Vaughan Williams’ Riders to the Sea (SOLT), and Sister Osmina in Puccini’s Suor Angelica (GGS).

Anna is in the third year of her Bachelor of Music degree at the Glenn Gould School of The Royal Conservatory of Music in Toronto, where she is studying with Jean Macphail and Peter Tiefenbach. For a year prior to her post-secondary studies, Anna was a scholarship student at the Phil & Eli Taylor Performance Academy for Young Artists. She is an active volunteer and Regional Director of the Toronto Region for the Back to BACH Project, a world-wide initiative to inspire and encourage young school children to learn musical instruments. Outside of music, one of her hobbies is Polish folk dancing. For the majority of her life she was part of the ‘Lechowia Polish-Canadian Folk Dance Company’ which would perform dances of the various Polish regions and travel to folk festivals around the world. As a first generation Canadian, Anna is happy to maintain her Polish culture through regularly singing within the Polish community and discovering the little-known repertoire of Polish composers.