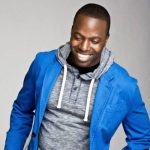 Andre Anthony is a Canadian performer, and writer.

Andre Anthony has been praised for his charming vocals and infectious energy. He commands the stage with his confidence and lures the audience with his voice. He began his journey singing in the church choir and performing in community theatre. He has served in church ministry since he was a child. He continues to serve as a Musical Theatre Director, Choreographer, soloist and Worship Leader for missions trips. Andre Anthony resides in the greater Toronto area. He studied Film Production at Ryerson University. Andre received his Music degree from the Thompson Rivers University and his Acting for Film and Television Diploma from Humber College. Andre was the first director and creator of the Humber Gospel Choir and is the lead singer of the Toronto based band Sophisticated Funk and has released a solo big band jazz album titled Andre Anthony: The Gentleman, available on iTunes and Spotify.

This Dora nominated performer has worked with many prestigious artists such as Josh Groban, Ryland James, HONORS, Laila Biali, Divine Brown, Sharon Riley, Kurt Elling, Robin Givens, the Toronto Mass Choir, and many more. Select theatre credits include Rock of Ages (Stage West), Only In Vegas (Mayfield Theatre), Joseph & The Amazing Technicolor Dreamcoat (CPA Centre), Kinky Boots (Mirvish), Handel’s Messiah Rocks: A Joyful Noise (Living Arts Centre), Joy In The Morning (Queen Elizabeth Theatre). Andre has also directed Disney’s Highschool Musical (Meadowvale Theatre) he has written, directed and choreographed The Passion of Jesus Christ (PCWC Players) and Black Nativity: Home for Christmas (PCWC Player). Andre recently received a development deal with the CBC for his original sitcom The Gospel According to Garrett. With all of that, he acknowledges his highest honour is to be a follower of Christ.

He is currently the host of The 60 Second Check-In, an interview game show designed to give viewers a fun quick look into the best of gospel art, entertainment, and culture. He is now preparing to release new original Contemporary Christian Music this year.