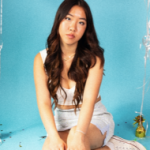 My name is Sarah Catharine and I am an independent singer-songwriter and producer from Canada, who records all my music in my car! Earlier this year I released by very first single, That’s a Lie, which was later followed by my second single, I’d Be Dead Too. While ‘That’s a Lie’ mirrors a dark-pop, Billie Eilish style, ‘I’d Be Dead Too’ is an emotional pop ballad, often compared to Taylor Swift and Olivia Rodrigo, that features a powerful bridge that was teased on Tik Tok reaching over 40,000 views.

I am so excited to announce that my debut EP ‘Thank You for the Content’ will be out on September 24th, and was fully written and produced by myself. It features five breakup pop songs, with the goal of each song sounding different from the other. The premise of my EP is all about celebrating the heartbreak and taking bad situations and turning them into good songs!