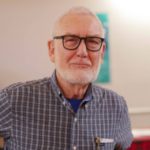 Norm emigrated from England at the age of 17. He took several different jobs before going back to school to earn his RPA. He had a successful career in property management.

While travelling in New Brunswick shortly after retirement in 1992 he met a man who turned wood on a lathe. After spending some time watching him and chatting with him Norm was hooked. He purchased a lathe and the rest is history.

He has made over 4700 wooden pens as well as various bowls, vases, walking sticks and Christmas novelty items. He uses all “found” wood, quite often from renovations such as the Sault Ste. Marie locks, University of Toronto Osgood Hall law library, the heritage log cabin in Mississauga and the Seguin ship in Bracebridge. He can be found following tree surgeon trucks in the hope of finding an interesting tree limb.

The Mississauga Arts Council has purchased many of his pens as gifts for guest speakers and Mississauga Economic Development has bought several pens to give to potential overseas clients. He has had several other commercial clients and also continues to enjoy displaying his work at craft shows.

Norm has two children and four grandchildren. He has lived in Toronto and Mississauga with his wife Jan for over fifty years.