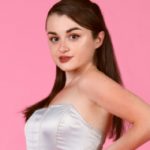 Following her 2021 MARTY Award nomination for Best Emerging Solo Vocalist, Mauve’s songs have gained over 1,000,000 streams on Spotify and 1.9 million plays on YouTube. Mauve was also nominated for the “Fan Choice” and “Best New Solo Artist” awards at the 2021 Mississauga Music Awards. Some of her live appearances include a performance at YOUTH DAY Global at Yonge-Dundas Square, a headlined performance at the Toronto Music Expo, and as a featured panelist at the Canadian Music Expo. Mauve also won the InterContinental Music Award for Best of North America-Pop for her song, “Come Around”. In addition, Mauve was nominated for “Best New Artist” at the Niagara Music Awards. She has also been featured on popular outlets, such as CHCH TV, CBC Music, and Stingray Music TV channels. Her songs are written to empower others to express themselves to the fullest.