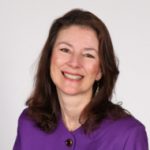 Cathleen MacDonald is the creator and writer-producer-director of the 26-part series, ‘Working Animals’ (Discovery Canada, Animal Planet, Canal D and distributed worldwide) and the writer-producer-director of ‘The Animal IQ Test’ (Discovery Channel, Animal Planet). Of her nine episodes of CBC’s ‘Moving On’, the episode, ‘The Courage of Sharon’ won a Columbus Film Festival Award and was included in CBC’s entry for a Gemini nomination. Recently she was the producer-director of the web series and digital art experience ‘The Lost Museum’ (Creative Hub 1352). Prior to that she was the digital producer for the feature documentary ‘The Divided Brain’ (Matter of Fact Media, CBC Documentary Channel), produced the documentary, ‘Deescalate’ with support from the Ontario Arts Council.

In addition to her creative work, Cathleen teaches filmmaking and distribution at workshops and as a guest lecturer, serves as a panelist for industry events, and is a juror for festivals and funders. She is the founder of Filmhive, a community-based collective that helps filmmakers develop their skills and independent projects. Cathleen has an Honors BFA in Film Production from York University, Toronto.