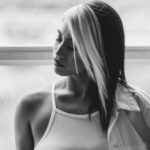 Arlene Paculan creates soulful pop with passion. The Filipino-Canadian’s recent successful album, “Home With You” has been embraced by many including CBC Radio 1, The Coast 89.7 (Glace Bay, NS), 105.9 The Region (Markham, ON) and 99.1 FM (Wallaceburg/Dresden, ON). Arlene was recently named the Best Pop Artist for the Mississauga Music Awards. She also received runner-up for NOW Toronto Magazine’s Best Songwriter for 2015 and she was in the Top 10 Regional Finals for CBC’s Searchlight Contest in the same year.

With her song, I’m Worth It, her message is to remind individuals to trust and believe that they can achieve anything they put their minds to. She campaigns the idea globally and represents an empowering positive voice for women. As Executive Producer for her company, Let’s Make Good Productions (LMG), she produces many events including WonderFest which showcases local talent and offers free workshops to all ages. The goal of LMG is to spread empowerment through art. For this, she was awarded 2014’s Hazel McCallion Volunteer of the Year MARTY Award in acknowledgment of her work encouraging others to be creative in their daily lives. Arlene is also a TV personality who the hosted Night Time with Arlene Paculan and is currently hosting a tv show called Striving Artist which showcases artists making a living off of their creativity.

Arlene has graced many stages across Toronto, including Nathan Phillips Square, Yonge & Dundas Square and Mississauga Celebration Square. In addition to her performances around the GTA, she has also performed in LA, NYC, Anaheim, across Canada, and adventured through her first European tour in the fall of 2015 playing in front of audiences in England, Scotland, Holland and France. In 2012, Arlene played at TD Toronto Jazz Festival and performed again in the 2015 season for the full length of the festival at Habits Gastropub. She has opened for Canadian songstress Jill Barber, as part of the Queen’s Diamond Jubilee Celebration and performed at the Beaches International Jazz Street Fest.

Arlene is a graduate of the Randolph Academy for the Performing Arts in Toronto and also studied piano through the Royal Conservatory of Music. Her debut EP album “I’m Worth It” was released under the production team, Kuya Productions. Rob Rapiti from BLR Entertainment has described her voice as “haunting, yet passionate”. Who knew such a “beautiful, natural singing voice” could come from such a shy little girl who used to whisper in conversation growing up?