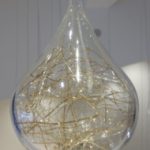 Alex Anagnostou, a Toronto-based artist, has been sculpting blown and cast glass since 2000. Much of her work is inspired by how glass has expanded our ability to see on a microscopic and macroscopic level. Her sculptures explore issues of time, space, nature, energy and interconnectedness. Her work includes small and medium sized freestanding sculptures for galleries, residential spaces, corporate awards, and gifts as well as hanging installations with blown glass forms and monumental public art projects.

Alex is an exhibiting professional artist based at her studio in the west end of Toronto near Lake Ontario. She holds two fine art-related degrees from the University of Toronto 1988 (B.A. Fine Arts Management) and the University of Western Ontario 1994 (B.Ed. Visual Arts) and graduated with a silver medal in 2004 from the School of Crafts and Design Glass Program at Sheridan College in Oakville, Canada. She is currently completing her qualifications in museum conservation for historical and contemporary objects specializing in metal and glass.

Alex has received fourteen awards for her glass sculpture from distinguished organizations including the Glass Art Society, the Glass Art Association of Canada, the Ontario Arts Council Grants, the Toronto Artist Project and three glass awards at the Toronto Outdoor Art Exhibition. An internationally acclaimed artist, Alex was selected by the British Crafts Council to exhibit at Collect 2008 held at the Victoria and Albert Museum in London and at SOFA Chicago, an international art exposition of fine sculptural objects. Alex’s work is represented in galleries in across Canada, the U.S. and in the U.K. and has been featured in three movies. Four of her glass sculptures have been acquired by the Canadian Federal Government art collection and placed in Canadian Embassies in Athens, Morocco and Hong Kong. She has exhibited work at the Cheongjiu International Craft Biennale in Korea, the Vancouver Museum during the 2010 Olympic Winter Games and has work in Public collections such as the Museum of Fine Art in Quebec. Her work was also during the Toronto Pan American Games in 2015. Alex has completed two major public art projects; one at the Royal Botanical Gardens in Burlington, Ontario and the other in Mississauga.