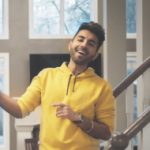 Abby V is an award-winning singer, songwriter, music composer and producer from Toronto, Ontario. In addition to his extensive training in Indian and Western Classical Music, he has significant studio and performing experience in R&B, Pop (English and Indian), Hindi (Bollywood), and Tamil. Showcasing his versatility as a musician, Abby has given various concerts across North America, southeast Asia and India. Abby is the winner of Astro International Superstar – a televised worldwide reality singing competition with contestants from all over the world. Having collaborated extensively, on stage and in the studio, with numerous world- renowned musicians, Abby has also composed, arranged and produced numerous film scores, soundtracks, albums and singles over his career. His debut solo album titled “First of All” – consisting of 8 original songs in English, Hindi and Tamil – released in 2019 to great commercial and critical acclaim.